Miami-Dade Police Detective Pat Diaz of the Homicide Bureau is honored as the 2001 Arthur E. Felton Investigative Excellence Award recipient. He conducted a six-year investigation into the criminal activities of the Willie Falcon and Sal Magluta organization. 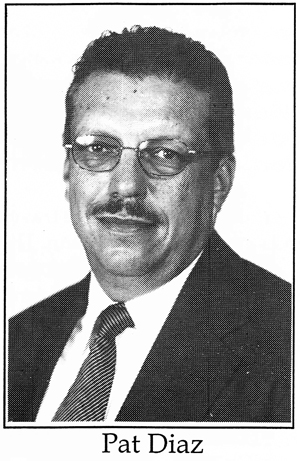 In June of 1993, armed gunmen entered the gates of a horse ranch owned by brothers Bernardo and Humberto Gonzalez, and murdered them. Miami-Dade investigators responded and immediately identified the case as a drug-related crime. They recognized the two brothers as being federal witnesses in the drug trafficking trial of drug kingpins, Sal Magluta and Guillermo Falcon. This event began a long-term inquiry into several previous murders of witnesses involved in the federal prosecution of these two defendants. Various entities became involved in the case after reports of bribing jurors, killing witnesses, bombing incidents and witness tampering. The two men were acquitted of all those charges and in 1996 a new effort was launched by the Miami-Dade Police Department, the City of Miami PD, the FBI, the DEA and the US Marshall in a cooperative effort to disrupt the organization. Det. Diaz was selected to assist with the homicide investigations that became essential elements of the conspiracy case.
Pat Diaz
Multiple layers of the organization were uncovered. It functioned as a profitable drug enterprise, with everything from hired assassins imported from Columbia to family members working with the bookkeeping. Det. Diaz was responsible for the preparation and presentation of the evidence, in both the money laundering and homicide phases of the investigation.
Four years after the double murder of the Gonzalez brothers, Det. Diaz’s inquiries led to a townhouse in Kendall, which had been rented by hit men in the organization. At Det.. Diaz’s direction, MDPD Police divers located the murder weapon in a lake behind the townhouse. Through his investigation, he also located former members of the organization who agreed to be cooperating witnesses.
In Sept. of 1999, a series of simultaneous search warrants were served in which over 7.4 million dollars was seized along with currency in safe deposit boxes and property seizure in Alabama, Colorado and the Florida Keys.